SATURDAY - Full and Half-day tickets are SOLD OUT. Grab your Sunday tickets now!

A New Chapter for White Pass

A New Chapter for White Pass

Rikki Cooper, has accepted the General Manager position effective July 1, 2021 If you ask Kevin what makes White Pass such a special place he will surely say, "It's the people... plain and simple".

We have to agree, Rikki Cooper has been part of the "White Pass Family" since she joined our ski club as an 11-year-old aspiring ski racer. Her love for the area is obvious and her dedication to the crew has been clear. Rikki took a pro-patrol position in the 2007/2008 season and fortunately for us, expressed an interest in a full-time year-round position. She moved into the office in 2009 and quickly began to learn the in's and out's of ski area management and operation.

Kevin, you are right (yes, we admit it), the people are what make the difference and you have assured a bright future for the ski area by choosing Rikki as your successor.

Thank you both for all you have contributed to our community.

We asked Kevin and Rikki to share some thoughts on their time at White Pass. Here they are in their own words: 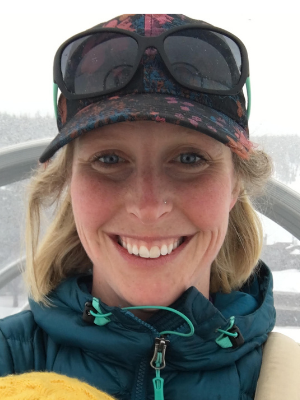 I hope that my lifetime of experiences here at White Pass as a customer, athlete, parent, and employee will guide my course in my new position.

Trying to fill Kevin McCarthy's shoes is an impossible task. He has faithfully led this company since the year I was born, and his determination and heart are essential to what White Pass is today. I could not have been more blessed to have had him as a mentor during my 13 years in the administrative office, and I know the entire White Pass staff feels an immense gratitude for his leadership during all of the many storms mother nature and the economy have thrown our way. I hope to keep White Pass's core values as my central focus.

My first memories of White Pass are of being new to the ski racing team, and not nearly as skilled as the rest of the kids. I have a vivid memory of riding up the Great White when it was brand new and hearing our coach say we were going to ski Mach V to Execution. The other two kids on the chair cheered, and I just hoped they couldn't see the tears of terror running down my cheeks beneath my goggles. Of course I survived and it was honestly one of those moments I have drawn power from for my entire life, you know that feeling of being absolutely terrified, yet persevering anyway? I vividly replayed that memory on the last Sunday of this season when I took my 6-year-old son down Mach to X for his first time.. I was careful not to tell him he had just skied a run called Execution until AFTER he had conquered it though!

I have been skiing at White Pass since age 11. I made some of my very best friends during those difficult middle and high school years here at the mountain. I love seeing the big black and white framed photo of my friends and I when I pass through the Sitzmark bar upstairs in the Day Lodge. I started coaching the littlest ski racers and teaching some lessons as a senior in High School, and continued doing that over the weekends throughout college. I took a position on the pro-patrol in 2007, the year after graduating from PLU, as something fun to do while figuring out what to do with a bachelor's degree at the start of a recession. I discovered and skied parts of the mountain I had never known existed, got to wake up incredibly early for avalanche control, and continued to coach ski racing on the weekends. In 2009 I took over the Controller position in the administrative office and began handling accounting and payroll for the ski area year-round. I thought I had hit the jackpot with a real career at a ski area. I've been lucky enough to get married and have two children since then, which necessitated working from my home office a lot more often over the past few years. Now that my youngest is entering pre-school, I'm excited to devote more of my time and energy back to the ski area that has shaped my entire life. I love that White Pass has remained committed to being a family-friendly resort with a local feel, even as the "secret" has begun to leak out within the PNW. I look forward to seeing you on the hill next season! 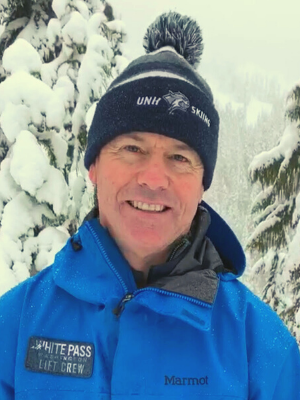 I owe all my success at White Pass to two individuals; Nelson Bennett and Dave Mahre. Nelson gave me the chance and Dave supported me from day 1; no we didn't always agree, but that is probably why we were successful.

As I reflect on over four decades at White Pass I am reminded of the beginning. I came from New Hampshire and had never traveled to the west, I was in awe of not only the mountains but the vastness of the west. I was a student at the University of New Hampshire and a member of the ski team. A close friend and I decided to be ski bums for a year and chose the Pacific Northwest as our destination. We blanketed all the ski areas with requests for employment; little did we know that White Pass was managed by a UNH graduate (Nelson Bennett) and therefore we were hired immediately. Race coach, patroller, instructor, we were asked to do a little bit of everything. We arrived in early fall and waited with great anticipation for the fabulous amounts of snow the Cascades receive annually, especially compared to the east. Well, it didn't snow that year! 1976-77 was a terrible ski season; we operated 8-weeks on mainly a heavy frost. In spite of the weather, I fell in love with the place and the people. I clearly remember the first day at White Pass. We drove up via Mt. Rainier National Park (still awe inspiring) and met most of the crew; however, the business office was in Yakima so we were taken down to town to meet Nelson. When we asked how far away the office was they said an hour! An hour? In New England if you drove for an hour you would go through three states! They chuckled and said "welcome to the west". It got better, or maybe worse... halfway to Yakima the trees disappeared - stop the car, where are the trees? What? Are you kidding me? I had no idea that I would find a high desert climate just east of the Cascades! Suffice it to say that I learned to love both the sagebrush of the east side and the forests of the Cascades..

My buddy, Jeff Lipes and I, did not remain ski bums, we returned to UNH but kept in contact with many friends from White Pass. Steve and Phil Mahre were lighting up the World Cup and Nelson Bennett was a FIS official so we would see them at the World Cup races in the east. I was heading for graduation with my business degree and during my year at White Pass I did noticed that there was no succession plan for Nelson Bennett. I asked him if he would recommend the industry to someone like me - hint hint - he took the bait and asked me if I would like to work into his position in a couple of years. It was 1979, I was 22 and had just been offered the General Manager position at White Pass after a 3-year transition. The catch was that I would have to be food and beverage manager my first year! So, I said I'll think about it. Yes, that's right - let me think about it. I could hardly boil water; did they know what they were asking? I was convinced to take the offer and the year in F&B was a blast. We had a great crew, had so much fun, and it was probably my best year at White (least stressful for sure). I must have passed Nelson's test because by age 26 I was named General Manager.

Looking back I could point to the ski area's expansion which doubled the size of our permit or the installation of the Great White Express which was notable since we were the first small ski area to do so as my greatest achievements. But sometimes it's the little things that mean the most. For instance when the carpet lifts were installed I had parents hugging me when they saw that the rope tow was gone! Surface lifts definitely made learning to ski and snowboard easier, especially for our youngest guests, and that improvement is something I am very proud of. However, my most important achievement has been finding a way to keep a strong management staff year in and year out. No one can run a business like this alone, you need experienced support, continuity, a management staff that cares; all the pretty new lifts and buildings are just that if you do not have the right staff. The staff can make it easy and fun; and that is what I have always had.

The future... I'm not going anywhere, so this is not retirement for me. I will remain President of the Board and will be on hand as to consult at the 10,000 foot level. You will see me at the ski area helping out wherever I'm needed. Thanks to all of you for making my career so much fun. See you on the hill next season!